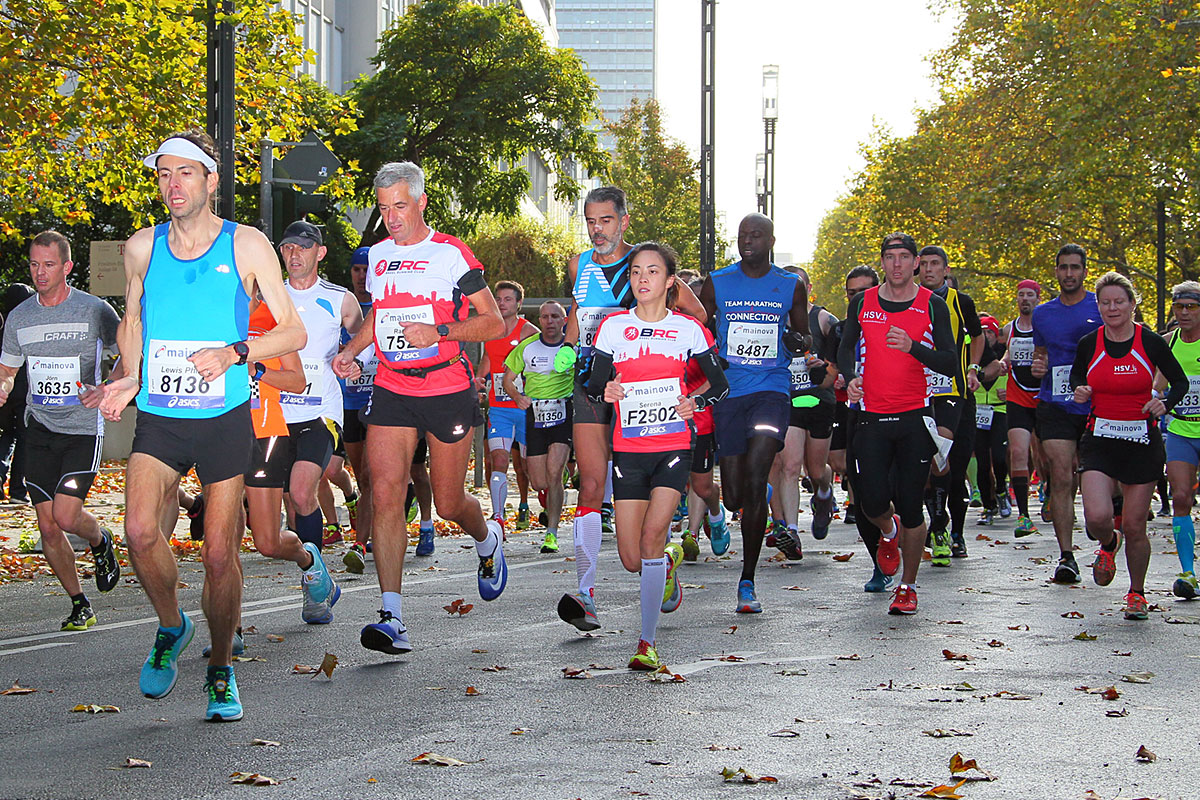 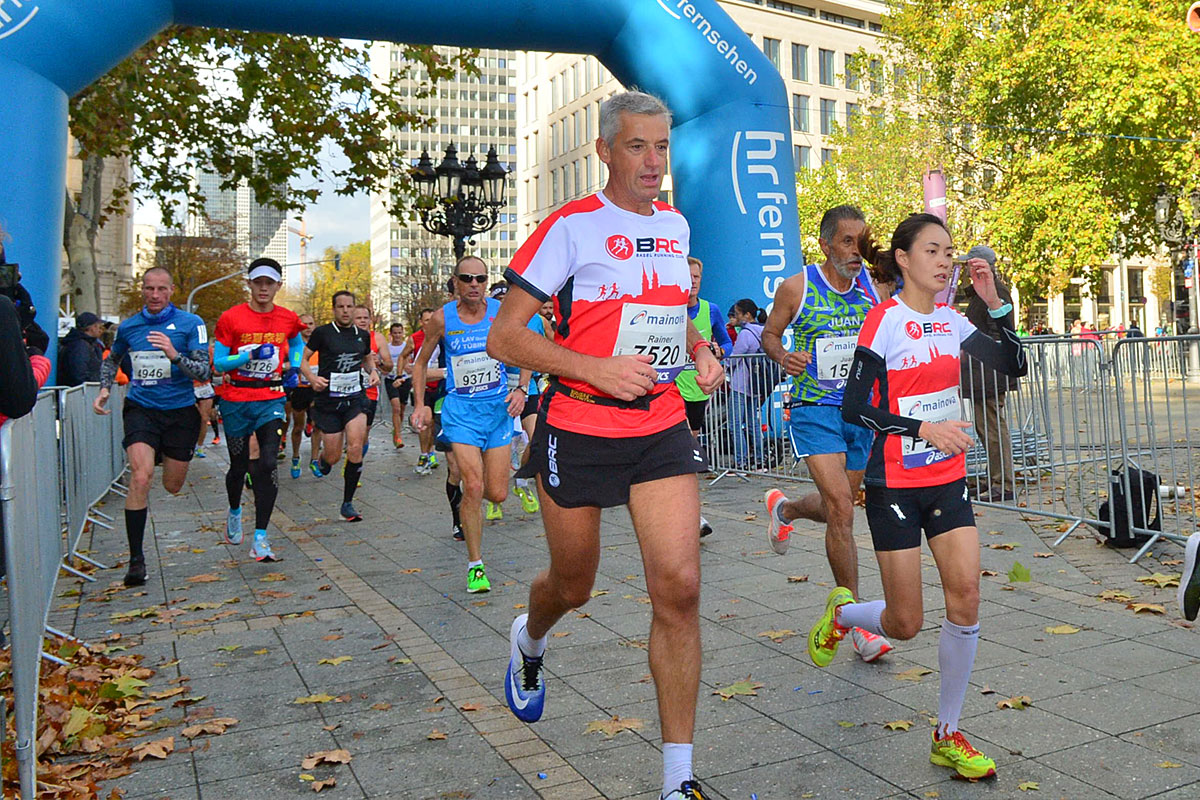 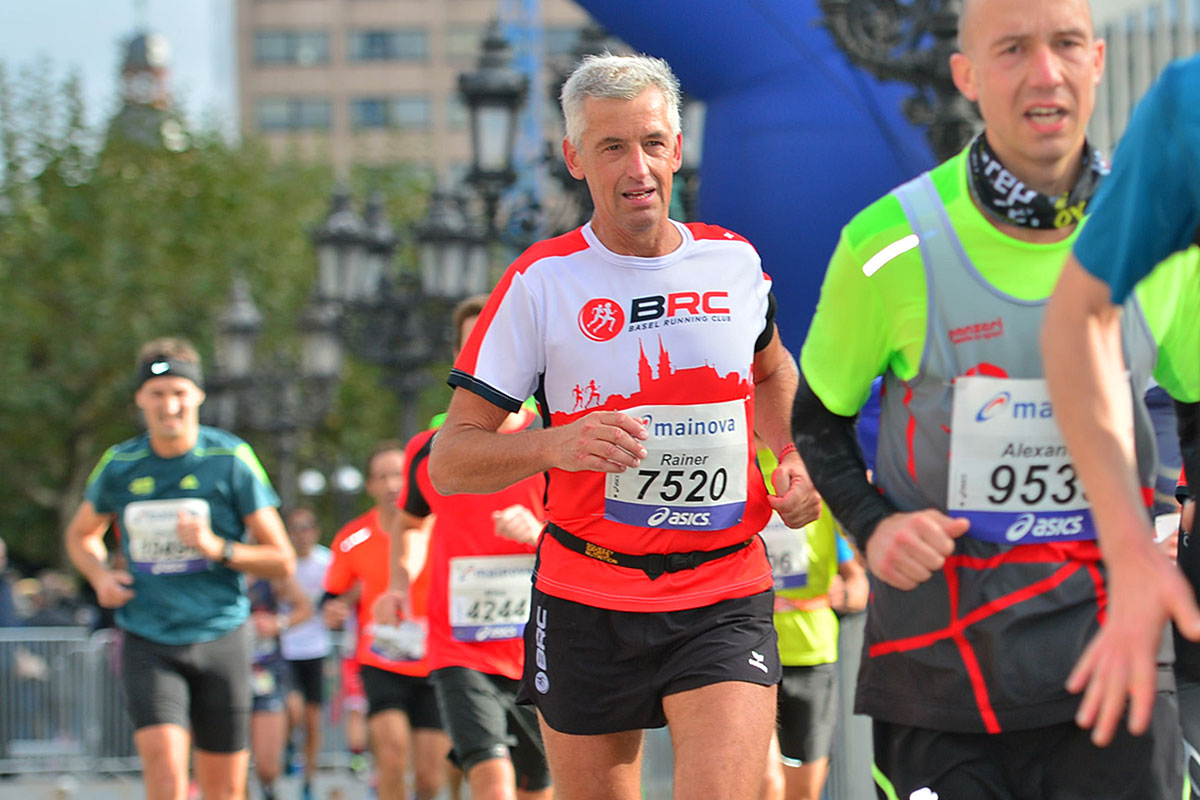 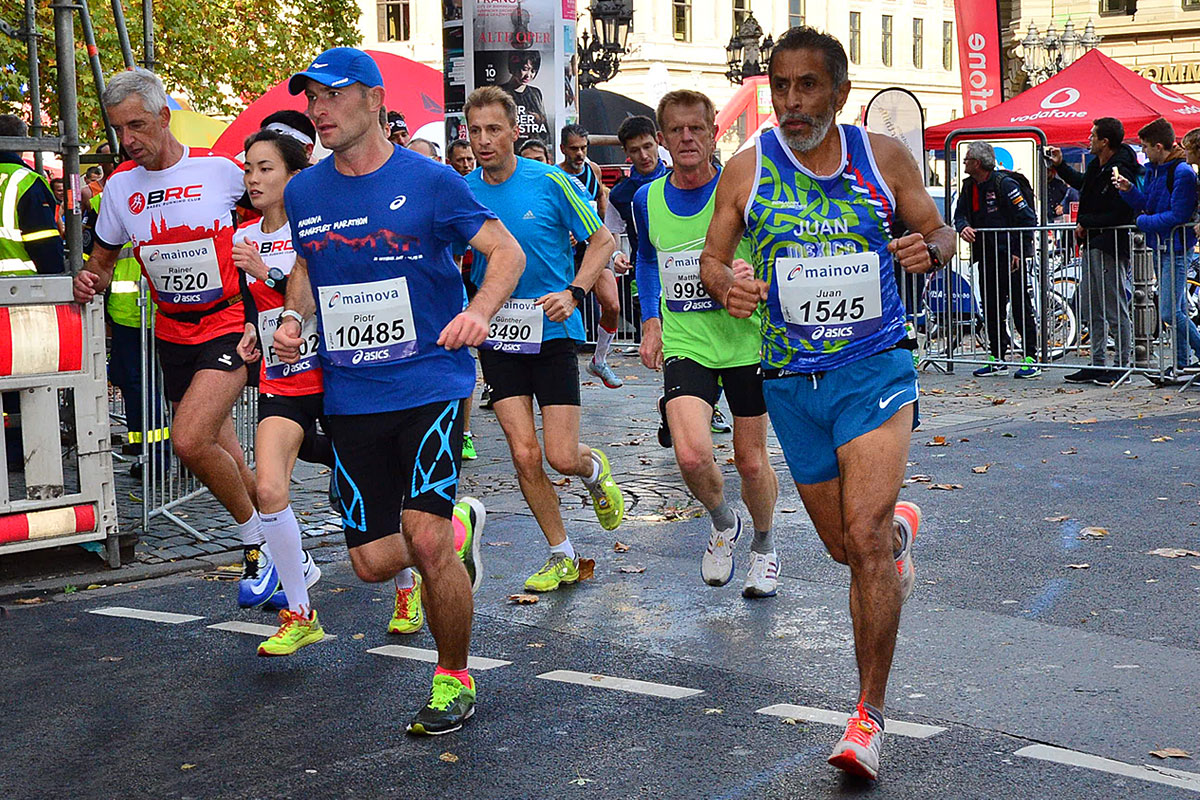 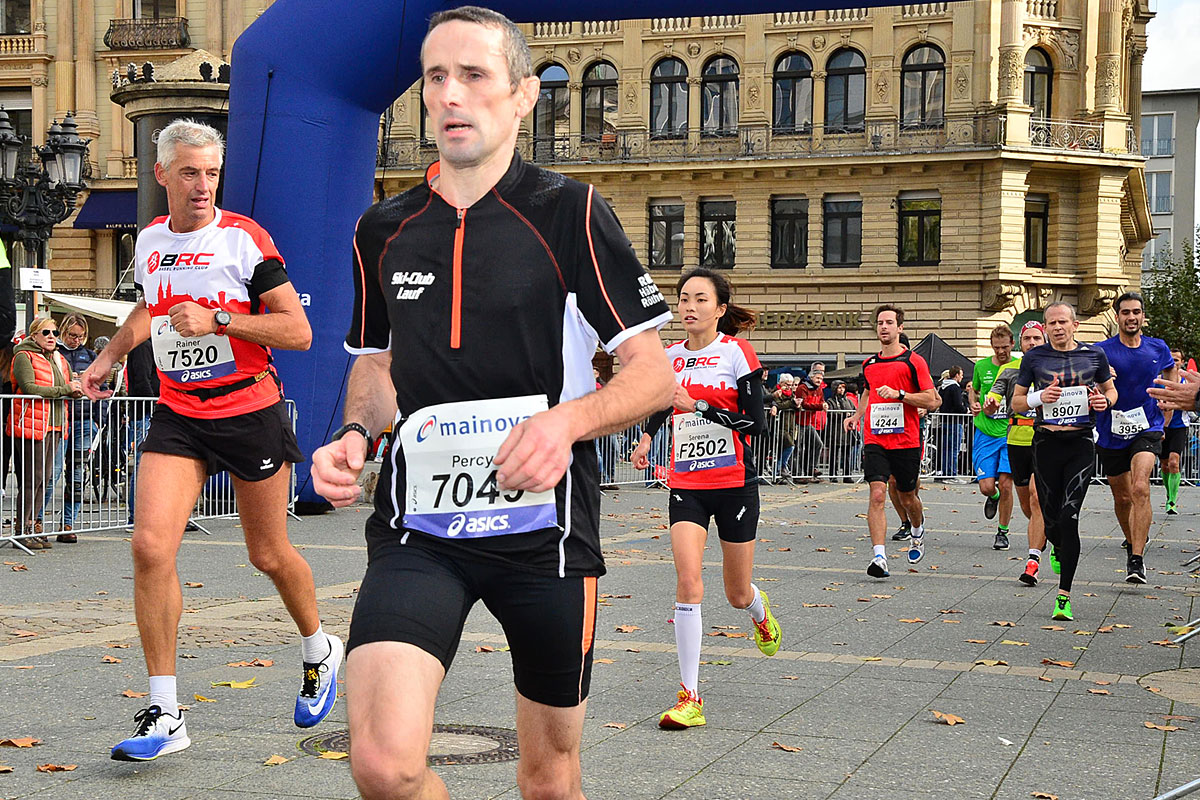 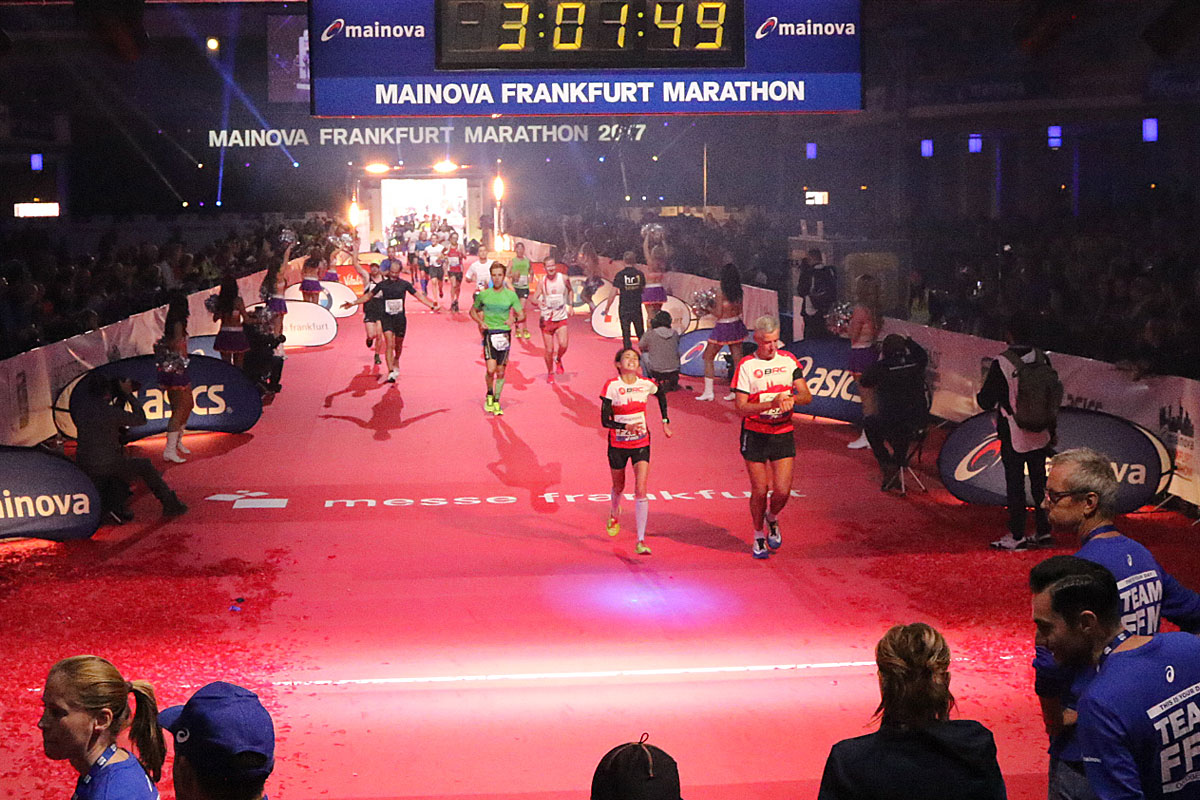 Roughly 4 weeks before the marathon, after the Copenhagen Half and 10km Basel marathon relay, Rainer and Luki encouraged me to revise my 3:05 target and give the 3:00 mark a go. Physically I was prepared to try, but mentally I had to re-shift, as my mind had been geared and focused on a 3:05 pace for the past 10 weeks. But then they both told me, when you are so close you just have to try, and when you don’t make it, you still have a best time. I believed in them, and slowly I shifted my mental goal for a 3:00.

The day finally arrived. Apart from the disorganised start and some kilometres of head winds at different points of the course, the Frankfurt marathon was pretty much flat with no sharp curves. Preparing for the worst of all weathers– thunderstorm with up to 80kmph of winds, it actually turned out pretty well in the end, 11-12 degrees with hardly any rain. The legs felt good, my shoulder and arm were abit stiff at times, but other than that everything was going well for a 3:00. Rainer even had an impromptu 3:00 fanclub running behind us, I had no time to turn around to see them, but I could clearly hear their footsteps collectively behind, it was like leading a human herd!

The journey went so well. And then kilometre 35 came. I often hear of runners describing of this ‘hitting the wall’ syndrome, I never really understood what it actually meant until yesterday. This wall came just when I least wanted it the most, so sudden and bad. It was quite a strange feeling, my breathing was still manageable, and I could hear Rainer so clearly just 10m in front of me – Come on, Serena, you need to fight now, come on! But alas, my legs just could not move, and the more I ran the heavier it became. And then pain started creeping into the trunk of my legs and soon spread to the side of my knees. It started affecting my mind too, I felt dizzy at some points that I had to close my eyes. Many a times I stared at the back of Rainer in front of me, and how I wished he could just pull or carry me home. 2:59:59 or whatever it is was not my goal anymore, carrying my legs to the finish was.

When we finally entered the Messe and crossed the finish line, I held onto Rainer for a few seconds just to steady myself and come back to reality. And then I looked up, we both smiled and gave each other a hug – no words were needed. It was clear that I have struggled, fought and gave my very best, and I could not have been happier with that. Looking back, I had no regrets embarking on this exciting journey of testing my body to its limit. 3:01:00, it is a new best time, and it gives me another goal to work towards.

As we joined up with Marc and made our way back, some of the fanclub members approached our TRainer to thank him for his pacing efforts. Well, well, I guess he will not be retiring as a shouting coach anytime soon!